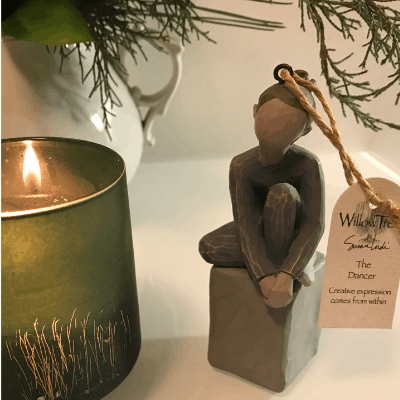 I never thought I would go through this.

Way before my time to become a mother I was already mothering little girls to find who they were, by teaching dance.

I didn’t know at that time, but I was way more interested on opening up emotional paths for them, to become what they were meant to be, than on teaching ballet technique to find perfect body lines to express imperfect human emotions.

I was fascinated to see how much they enjoyed the ride of letting their bodies go along with music shapes and forms, and how beautiful the end result could be. And the fun, ah the fun they had!

I was overwhelmed with emotion every time one of them would discover a different way to let herself go on a run across the dance room, feeling the speed of her feet reaching out for sensations she didn’t even know could exist.

I was overjoyed when a timid one would finally dare to jump higher and experience her heart beating faster and her smile brightening her face.

I was mesmerized with the opportunity of diving into the shadows of my Psychology program at the same, that I, intuitively, was watching my little dance students learning how to move their bodies to express themselves.

Ideas, projects, choreographies would flow abundantly, there was so much to do and so little time! There were no doubts about what to do, there was never a shortage of enthusiasm to try different dance approaches related to what the girls were living in their daily lives. Inspiration flew out of me like a fountain, my heart filled with a burning flame. I didn’t have any rational goals in place, other than doing what I was doing.

People started to gather, followers would join my small dance practice that now was named “Studio de Dança”. Yes, I could translate, but I won’t. It is still my Studio de Dança, where I learned that I was a generous person, happy, inspirational and most of all, creative.

The Studio took over, along with my youth and dreams and word of mouth spread out to the world that we were having fun, and that the Studio was a happy place, where everybody had a special spot, an opportunity to learn something important and everyone were welcome.

It was when I felt for the first time that I had found a job/mission that I adored, and I was the happiest person on the planet.

The Studio and I were maturing together, holding hands, learning how to build a strong path and we both believed we could aim for the stars. That journey last for several years. I was daring to be myself in a way I had never done before, being on my own, for one thing, and exploring many creative possibilities.

Then, the dark age came upon us with all its fury, sweeping the tender and young foundations of the Studio. The Studio had matured and we were leading towards a prosperous future but the dark age was unstoppable. Its fragile roots started to crumble.

The inspiration and happiness would come and go in waves now, mixed in with worries about bills to be paid, repairs to be done. The dark age was ugly and unstable, greedy and powerful.

My students/daughters were growing up, needing me more than and I had to slice my heart into pieces to look after everybody and keep the Studio going. I now had a daughter that I had to feed.

More people gathered trying to help and how they did! They did everything to keep the flame alive and with all their joined effort we were able to move on, a bit further into the journey, hearts still filled with hope.

As the Studio started to show its weakness, taken by the dark age hurricane, I started to blame it, calling it stupid. Stupid Studio.

The Studio resented badly and showed me that its light was now very weak and could not keep going any more.

I betrayed my beloved Studio, like foster parents that abandon their kids to sleep with strangers. I told it bluntly: I don’t love you any more and we were never meant for each other.

We went our separate ways and I buried the Studio alive, with no mercy, along with all its memories, photos and choreographies. They were worthless. I didn’t even bothered with a grieving funeral because life was calling me to survive. I didn’t cry.

Survived I did and so did my daughter.

She knows about the Studio but has never had a chance to participate in the dance circles of life that we once celebrated there almost every day. She has barely seen the joy of a full day of dance and play with no worries, bodies moving freely and enjoying the wind in our faces while we spin. I kept her safely far from all those dangerous happy times, where the Studio would rule my world and made me always happy.

I could not ever trust another Studio and she had to be kept always far from its dangerous powers.

Life kept going, dark ages were sort of behind us, we met the flying knight from the cold land, who joined our lives and provided us with endless love. The flying knight had never met the Studio but learned a few stories about it.

Memories were safely stored in a forgotten box in the basement and would only come out as annoying dreams in my sleep. That stupid Studio always coming back, I would say, leave me alone.

However, the buried Studio had other intentions and had never really forgotten that I had left it behind, without looking back.

It orchestrated with the Universe a big event where some of us, Studio followers, had to gather for the most difficult grieving ever possible. One of my beloved girls, the one who spoke 3 languages, the one with the brightest smile, strong and daring, talented and charismatic, had been called up, her circle of life had been completed.

We all disagreed and cried in despair but the Universe was final: her cycle was done.

We all came from different corners of the world, humbly, grieving, devastated but grateful to be together to celebrate her wonderful life and say our good byes.

I never thought I would go through this. I felt like her co-mother and mothers are not supposed to bury their children.

While I am here, to say my good bye to the girl who spoke 3 languages, feeling these heavy tears falling down my face, I hear a fainting cry, a low pitch sound coming from nowhere. I can still recognize, it is the Studio’s voice.

It is whispering in my ears the tale of a sassy little girl, half Brazilian, half Japanese who couldn’t stay still and used to dance all around the house all day.

I don’t want to hear, I say. But Studio keeps going on its narrative and now is telling me how the girl fell in love with dance, called out for more dancers to join her, and rejoiced her life in its fullest through all sort of body movements and rhythms.

Its voice is louder now when explaining that the sassy girl, half Brazilian, half Japanese, had to let go of all of it for a while, which broke her heart, and for that reason, she had to hide in the land of greyness, where nothing happens.

While I am here, I picture the dancer who spoke 3 languages, laying quiet and still, Studio is beside me and I recognize a small flame starting to burn again in my heart.

I can suddenly feel this familiar warmth, the one that she, the dancer who spoke 3 languages herself, has kept alive for all this time.

The Studio invites me gently to welcome this burning flame again, saying that it will be ok and promising me that it will make my life prettier and exciting again. It tells me that now is time to leave the land of greyness, where nothing happens.

I am in doubt and afraid and so sad that my soul could fly away any moment.

It is when I look up and I see a rain of snow flakes flowing in the air, bouncing along with so many hands trying to grab them. Silence, lightness and peace fill the air.

We’re happy to keep the snow flakes forever locked in our memory.

My heart feels warm again, it is indeed that familiar burning flame.

I close my eyes, take a deep breath, and welcome it like if it was the first time.

The Studio is leaving now to serve other souls. It glances at me and I suddenly know that this is a gift I am receiving. The last gift from the girl who spoke 3 languages.

A Tribute to Bethany Schklar and her family

This site uses Akismet to reduce spam. Learn how your comment data is processed.